Metro Scania, ARY 225K successfully passed it’s Mot on April 11th 2017. The Mot pass was achieved after great efforts by the LTHT restoration team to get the bus back on the road after suffering major engine failure whilst on route to the 2015 Showbus event at Woburn Abbey. The Trust owned vehicle which is the oldest surviving Scania bus in the U.K  has received a transplanted engine from ex London Transport, Scania Metropolitan double decker, MD99. ARY 225K Will make a reappearance at this years LTHT & GCR Road and Rail Event on Saturday 22nd April 2017 and will be in service on the 09:30 departure from Loughborough (Midland) Rail Station to Quorn Station yard. 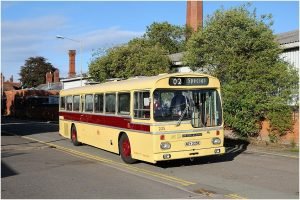