Former Leicester City Transport Dennis Dominator No.240 built with East Lancs bodywork has returned to Leicester for further preservation after nearly 10 years exile on the South Coast. The vehicle had latterly had been converted by First Leicester as a driver trainer and became the last Dennis Dominator on the books of the old Abbey Park Road garage. 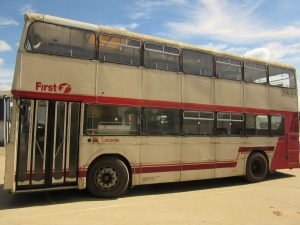