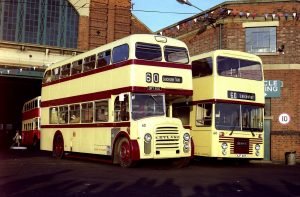 No 60 was delivered in August 1966, one of ten that year with Park Royal bodywork of the style favoured by that builder at the time. It was purchased by Wythall Transport Museum (BaMMOT) in December 1980 after repainting by Leicester City Transport. No 60 became an active member of the Wythall fleet but in recent years it has become a static exhibit at the museum. The bus was an important part of BaMMOT’s working collection until the 1990s when it became apparent that the platform rise was in need of replacement. However, BaMMOT’s prIorities are mainly concerned with vehicles with a West Midlands history, so 60 was never going to be near the top of the queue for restoration work.

In common with many other similar organisations, storage space is at a premium at Wythall and consequently BaMMOT’s trustees have given the LTHT a unique opportunity to acquire 60, a bus which is very much in its original configuration. As far as the bodywork is concerned, the main areas requiring attention are the aforementioned platform area and the lower body pillars at the rear. The interior is complete although all the seats will need recovering. The Leyland also requires a complete repaint in LCT cream and maroon livery.

On Friday 10th November GRY 60D became a new member of the LTHT collection and was moved to a new storage site.