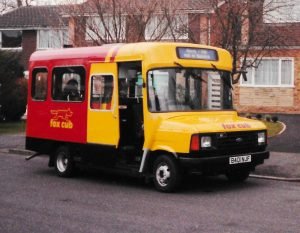 Fox Cub M1 is not owned by the Trust, but is an accessioned object in the Leicestershire Museums collection.

M1 was first registered in April 1985 and was the prototype for the Midland Fox ‘Fox Cub’ minibus fleet.  This later became the largest fleet in the country.  It was allocated to Coalville garage and entered service in July 1985, where it remained until withdrawal.

Snibston Discovery Park was opened in 1992 and in 1994 Midland Fox donated M1 to the Park, after smartening it up and making it look presentable.  After being part of a display for a few years, it moved to the Abbey Pumping Station museum in Leicester.

The bus was in good mechanical order and was rallied quite extensively, visiting local East Midlands bus and steam shows, carnivals and similar events, and even ventured to Showbus at Duxford.   It had had several interior parts removed before being given to Snibston and a successful effort was made to replace these before the Midland Fox fleet was completely withdrawn.  Also work commenced on repairing some of the worst areas of corrosion, and a new rear door was made from scratch.

The next area to be tackled were the wings, always a problem with Transits.  These had been filled before being put on display and looked OK from a normal viewing distance but did really need some work. Unfortunately before this could be done, in 2003, the bus was called back to Snibston.  Here it remained, on display but unused, until Snibston closed in 2015.

On closure it was put in store on the Coalville site.  Unfortunately it was discovered that the building had an asbestos problem and no access was possible.  I kept in contact with the curatorial staff and towards the end of 2019, success, the vehicle had been removed from the shed and taken to another, secure, Leicestershire Council site, and it was available to be viewed, obviously by special arrangement.

When viewed, it was very pleasing to see it clean and as it was delivered to Snibston.  Except for two holes in the tops of the wings!!

But appearances can sometimes be deceptive.  The bus has not run now for many years and will need a very thorough mechanical re-commissioning if it is to be put on the road.  And the wings sorted!!  Not an impossible task but not cheap.  It is however remaining part of the LCC museum collection and will be kept with the other exhibits saved from Snibston .

And hopefully, there will be Open Days at its current site when it will be able to be viewed, but any plans for these have been put on hold, for obvious reasons.