The LTHT are delighted to announce that following a successful application the trust has been awarded a conservation grant of £20.000 by Arts Council, England towards the restoration of the bodywork of LCT Leyland Tiger Cub No 191. This bus has been provided through their PRISM (Preservation of Industrial and Scientific Material) Fund and is the maximum amount available.

This welcome grant provides a significant boost to the restoration of the bodywork which will start during April and has to be completed by the end of the year. This part of the project does not include painting or fitting out the interior so it is likely to be 2017 before 191 is completed so, unfortunately, we have missed our target of having 191 back on the road in time to celebrate the 50th anniversary of Park ‘N’ Ride in December 2016.

Some interesting facts emerged whilst the application was being put together. 191 is the oldest surviving Leyland Tiger Cub with a Weymann Hermes body out of a total production of 608 that were built only six (including 191) have been preserved.. The operator with the highest number of similar buses was Western Welsh with 180, followed by Edinburgh 100, North Western 84, Northern General 60 and Rhondda 42.

We are grateful to the Arts Council, England for their support in the 191 restoration project. 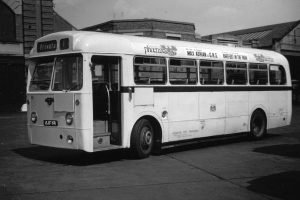